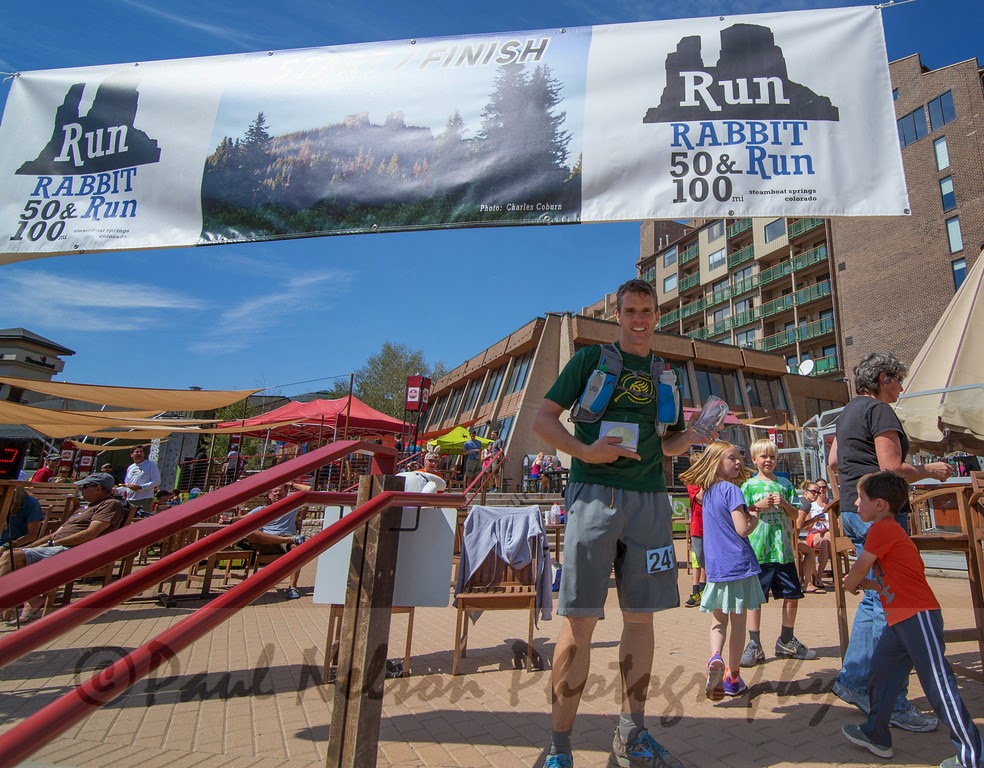 When the opportunity opened up to spend a weekend in Steamboat Springs, and spend some time on trails I have never been on, I had to take advantage of it.  So why not sign up for a 100-miler less than 2 weeks before the event?  At least it was more than the 5 days I had to "prepare" for my last 100 (Crawford).

The Run Rabbit Run 100, while just in it's 3rd year, has become quite the event, drawing some of the top mountain ultrarunners around.  The big prize money has a lot to do with it, but the top-notch organization, sponsors, volunteers, course, and great host town help a lot too.

A unique aspect to this race is the split race of "tortoises" and "hares".  The tortoises start 4 hours earlier, have less strict cut-off times, are allowed pacers, and do not compete for the big prize money.  The hare race is designed to be more competitive, with big cash and quite a few big names in ultrarunning squaring off.  I was not too crazy about this separation of runners when I first learned of it, but now don't really care since most of us are free to choose whichever race we want to be in.

I was a bit torn on which race to enter.  Do I see if I can hold my own (in the middle of the pack) and not make a fool of myself in the hare race?  Do I enter the tortoise race and possibly try to be somewhat competitive (maybe nearer the front of the pack)?  Which scenario would motivate me to my best race?  Anyway, the deciding factor was that I wanted to share some miles of the course with Kristel, and pacers were not allowed in the hare race, so a tortoise I would be.  And as it would turn out, I had to try not making a fool of myself in the tortoise race.

The chilly 8am start (a pleasantly later start than most races) had us climbing straight up the ski slopes of Mount Werner as the sun was rising to a beautiful day.  I held close to the leaders on this climb and wondered how long that would last.  I made it to the first aid station (Mile 4) on top of the mountain in good shape, but as soon as we hit some nice runnable rolling and downhill terrain, I knew my legs were in trouble.  My legs would never feel very good at any point in the entire race.  Maybe I should have come into this thing a little more rested?  Taper?  Well it's hard to taper for a race when you're not even planning on running it until the last minute.


﻿
I dropped back quite a few positions on the run from Mount Werner to Long Lake.  I even took a little side trip off trail (as nature often calls early in these races) and I was in no hurry to jump back into the "race".  Even though these 100-milers take more than a day to finish, there is always some jockeying of position early and it almost feels like your running in a 5K  instead of a 100-miler.  I just tried to forget that I was racing and took a few moments to enjoy the views and fresh mountain air.  If things went well, then I would enjoy "racing" sometime after mile 90.

When I hit the Long Lake aid station at Mile 11, I figured I didn't really need anything and made a quick U-turn (it was a short out and back to this aid) passing at least a half-dozen or more runners who were still there.  For this race, I decided to carry most everything I would need and not use drop bags.  I figured it would at least help save me some time in the aid stations.

My favorite section of the whole course would be next, the Fish Creek Falls trail.  I ran pretty well down this trail, chasing down a couple of friends, Carson and Bremner, in the process.  Turned out I wouldn't stick with Carson too long as he went on to crush the course and finish 2nd.

After hitting the Fish Creek Falls trailhead (Mile 17) it was 4 miles of pavement back to Steamboat.  If my legs weren't already dead at this point, they would be after 4 miles of downhill pavement pounding.  I did not enjoy this at all!  Dealing with cars and even a stop light reminded me of why I quit road running long ago.

I was excited to see Kristel for the first time at the next aid station (Olympian Hall) back in town.  Kristel greeted me with a roast beef sandwich, Coke, and beer (all delicious).  Nice to also see Chris there, who I ran with at Crawford.  I was glad that my stomach was still holding up.  However, I was already 20 minutes behind my target pace at this point, arriving around 12:20pm, and my legs felt like they had already gone 80 miles.

For the next 21 miles or so (probably longer), we would loop around to the Cow Creek aid station (Mile 29) before coming back through town again.  It was getting noticeably hot and I wasn't particularly enjoying the dirt road sections through here, or the lack of shade heading out to Cow Creek.  The course did finally hit some nice forested singletrack a couple miles after leaving Cow Creek and that rejuvenated me some.  I would play leap frog with Bremner and Fort Collins friend Mike through here.  A few miles before getting back to Steamboat, we reconnected to the trail that we took out of town and I would see my first "hares", wondering at what point they would be chasing me down.

I met back up with Kristel at Olympian Hall (Mile 41) around 5:30pm (now 30 minutes off my goal pace) where she would join me for the 4 miles back up the pavement.  We walked most of it as I struggled to eat some more of my sandwich along the way.  My appetite was fading.  Just before reaching the Fish Creek Falls trailhead, there was my favorite Steamboat resident Sean with beer in hand and his always jovial spirit.  It was great to see him, but it was also time for me to leave Kristel until Spring Creek Ponds (Mile 69) where she would join me again to the finish.

Back to my favorite trail (Fish Creek Falls), this time going up as the sun was going down.  I would occasionally stop and turn around to view the amazing sunset.  At least it was a good excuse to rest for a second or two.  After the sunset, it got cold in a hurry.  I was also falling apart in a hurry.  Between the nausea and getting cold, I came back into the Long Lake aid (Mile 51) a mess.  I immediately grabbed a chair by the campfire and slowly ate some potato soup, shivering the whole time.

I spent probably 20 minutes hoping to feel a little better and dry out my wet, cold feet before leaving.  I left the aid station with the leaders of the hare race (Krar, Arthur, and Browning).  Needless to say, I let them go ahead of me.

I walked most of the way to Summit Lake aid station along another dirt road section, sipping on Sprite while hoping to digest the soup I ate at Long Lake.  My neighbor Nick passed me through here.  I was hoping I would be able to hang with him at least briefly when the inevitable pass occurred, but unfortunately I wasn't in a place that I could make that happen.  Congrats to Nick on his 5th place finish in the hare race!

At Summit Lake (Mile 57), I was able to get a little more food into me, this time mashed potatoes, while briefly escaping the cold in their heated shelter.  I am guessing the temps were well down into the 20s at this point.  I would first see Katie N from Fort Collins here with her pacer Marie.  Katie was charging hard and eventually would leave me in the dust on her way to 1st place tortoise female!

On the downhill dirt road from Summit Lake to Dry Lake, I finally thought I was turning things around.  I ran pretty well through here, made a quick stop at the Dry Lake aid station (Mile 65), and continued strong down the four miles of singletrack to Spring Creek Ponds (Mile 69), arriving around 1:30am, where Kristel was waiting for me.  Unfortunately, this was 2 hours later than I wanted to get there since I was hoping for a shot at a sub-24 hour finish.  Now I knew that wasn't going to happen.

From this aid station, you turn around and head back up the 12 miles you just came down.  This climb would take the rest of the night as I tried to fight off sleepiness, especially on the dirt road from Dry Lake to Summit Lake, and some recurring nausea.  I kept telling Kristel I would come back to life in the morning and then we could finish strong.  Well the sun was rising just as we were leaving the Summit Lake aid station (Mile 81), but I never seemed to come back to life.


We did get to avoid the dirt road from Summit Lake to Long Lake on the return trip as the course took you on some nice trail along the CDT (Continental Divide Trail).  I would have loved to run this section (and should have been running this section), but I just didn't have it in me.  My stomach still didn't want anything and my legs and feet were trashed.  A sub-30 hour finisher buckle was now my only goal and I wasn't willing to push myself any harder than necessary to get it.

Even though I had nearly 2 hours to cover the last 6 miles of downhill road off Mount Werner to the finish, I at least forced myself to run it.  It was painful, but I was glad to be done in 29 hours and 19 minutes.  My 6th 100-mile finish.


I have to give this race a big "thumbs up" for a lot of things.  The whole event, from pre-race to post-race, was very well organized and Steamboat Springs is a great host!  Such a great place to be in September!  The prize money, although it doesn't apply to me, is a great thing to attract the talent and competition every year.  And the whole "tortoise and hare" thing is at least unique.  My biggest "thumbs up" though goes to the aid stations.  Probably the best and most enthusiastic aid station volunteers of any race I have done!  And lots of great food as well!  I wish my stomach had allowed me to eat more of it.  Thanks to everyone out there!

Unfortunately, I wasn't overly inspired by the course.  I am probably an unfair judge because I have had the privilege of running some great 100-mile courses.  There were definitely some trails I really loved, but there was way too much road (dirt and pavement) for my liking.  And yes this course is longer than 100 miles (maybe as much as 107?), but that's fine with me.

So I think that is the end of racing for me in 2014.  At least I was pretty consistent (consistently mediocre) with every race this year.  But I will take a 100-mile finish anyway I can get it.  My idea of carrying over enough fitness from one bad race to the next (hoping for a better result) didn't really work.  I think it is time to reset, be patient, and put in a good fall and winter of more balanced and quality training to build up for whatever challenges I am lucky enough to take on next year.