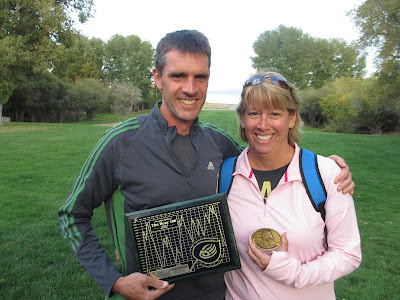 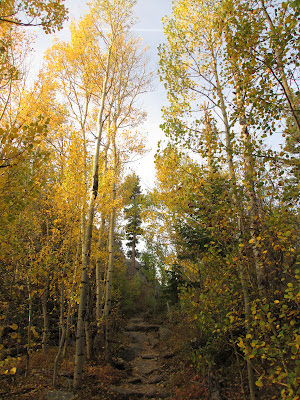 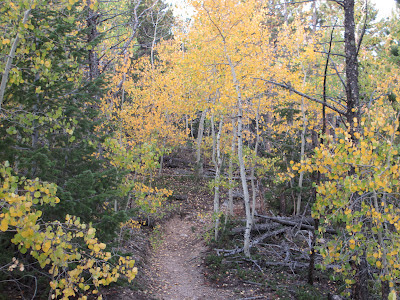 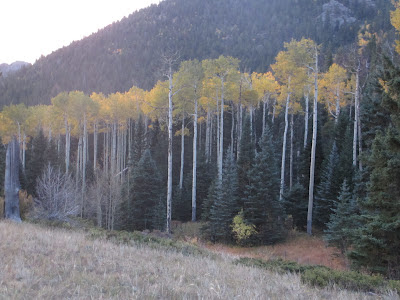 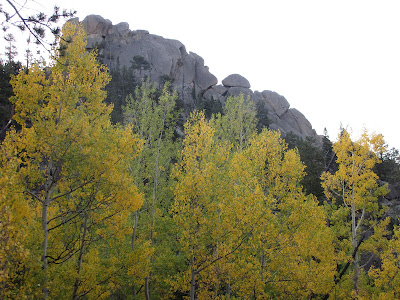 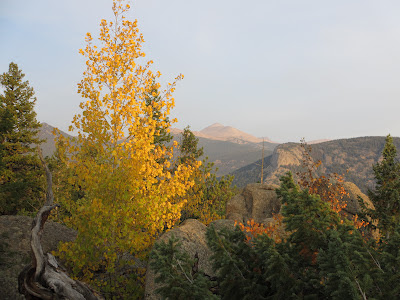 Welcoming Fall out on Lumpy Ridge in RMNP this morning.  I hear that the Wasatch and Bear River mountains are beautiful this time of year as well.  I am going to have to check that out real soon. 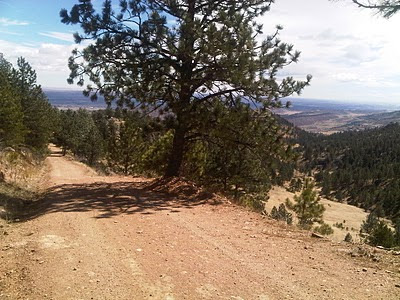 50 miles of Towers Road?  Why?  It's because I have crazy friends, with even crazier ideas.  Hey guys, let's run up and down Towers Road for 24 hours!  Yay!  Okay, I did show up to the inaugural 24 Hours of Towers for a few laps in the closing hours last year.  Let me tell you that Towers Quad  still makes me nauseous just thinking about it.
The appeal of Towers Road makes no sense to me.  Surrounded by miles and miles of wonderful singletrack trails, why does one run straight up this road to a summit of ugly buildings and towers?  The bi-weekly Towers Time Trial runs have practically become legendary as I get asked about them by runners from afar.  Well if you look at the long list of time trial data over past few years, you won't see my name anywhere.  This climb kills me!  I want nothing to do with it.
So to wrap up the toughest block of training I've ever done in my life, and just 3 weeks before my fourth attempt to master the 100-mile distance at The Bear, I couldn't think of a better form of suffering than to commit myself to 7 laps of this torture (50 miles with 12,000 feet of vertical).
At least I would have a great time camping with friends as I dusted off the camping gear and settled into our "24 hours" home base at the campground next to the trailhead.  You see the 7 laps were not to be done continuously, but would include some much needed distraction from the task at hand.
﻿
﻿
The "fun" started Saturday morning at 7am with the festive opening lap run with many friends I hadn't run with in a while and some new faces I enjoyed meeting.  As the "big boys" decided to run much faster up the hill than I wanted to, I settled into a pleasant climb up with my Bear running mate Victoria and Maggie, who would eventually crush her competition in the Towers laps/beer drinking/taco eating challenge.  A pretty painless first lap completed at about 8:30am, as Cat, Alex, and I were actually the first ones back to the campground.  Then it was time for a few hours off as I had some family activities back in town and it was already getting too warm out for me.
A little after 2pm, I headed back out for some "heat training".  It was 100 degrees during the day at last year's event, but the 80 degrees this afternoon was plenty hot.  The goal, a quick double.  I did the first one solo, running a bit with Cat who was already on lap 5!  Steph (also running Bear) and Alex joined me for the 2nd, and didn't let me slack off one bit.  At around 4:30pm, I'm signing off on lap 3 and am not going back out until after the sun sets.
﻿
Before I know it, it's after 10pm.  Despite some interest from others in joining me for an "all-nighter", or at least part of it, there are no takers.  Cat is done at 6 laps.  Alex wants to go to bed.  I break away from the lure of the warm campfire and cold beers and, at 10:30pm, I'm headed out with 4 laps to go.  In the cool air, under the starry skies, and with the glow of the city below, I am running up Towers in exactly the conditions I prefer.
I knock off another 2 laps in no time, feeling great, and enjoying the perfect night.  With lap 4 completed before midnight, I cap off my first 100-mile training week in my life.  I watch a spectacular yellow moon rise over the city skyline on lap 5 and am back to the campground a little after 1am with only 2 laps to go.
I really don't start to suffer at all until lap 6.  On lap 5, I had some thoughts of going after 8 or maybe even 9 laps (Cat set the record at 8 last year), but on lap 6 I quickly squash those thoughts.  Now with the moon in full glow, I've got the headlamp turned off, getting an even better visual of the beautiful night sky as I grind along.  I think I can go up this road with my eyes closed anyway.
I surprisingly run into another runner, Michael from Westminster.  He did 3 laps in the morning, went to work, and then came back for more!  I eventually catch back up to Michael as we enter the campground together just before 3am.  I tell him I'm headed up for one more, but he has had enough.﻿
﻿
I take my time on lap 7, hiking more than running on the way up.  When I reach the top, I feel like I just "threw the last hay bale in the barn".  My work is done, bring on the taper!  It was really too bad that I still had to get off the mountain and I consider just crashing there until morning.
﻿
I slogged my way back down the road, meeting up with Glen and his dog just before reaching the campsite.  That was cool, because it meant that for the 2nd straight year we would have someone on the hill continuously for the whole 24 hours.  Too bad he was only going up to retrieve the dog leash he lost and that I had stuffed in my pocket.  I signed off one final time on the official clipboard back at camp.  Lap 7 completed at 5:22am.  Probably time enough to get number 8 before 7am, but I opted for a nice 2-hour night's sleep in the tent.
﻿Thanks to Brian for organizing this again.  A really fun weekend!  I still hate Towers Road.  Same time, same place next year Brian?  Can't wait!
﻿
﻿
Posted by Rob at 1:08 PM 6 comments: