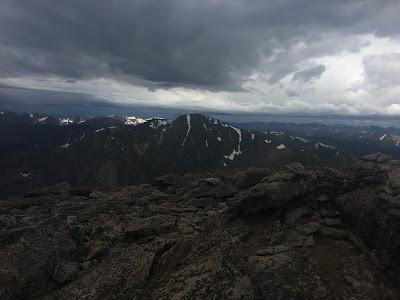 The Mummy Range, extending through the northern portion of Rocky Mountain National Park and beyond, has long been my local alpine playground.  After a relaxed traverse of the Mummy Mania (or Mummy Kill) route last weekend with Alan, we discussed the best way to make a loop of it.  It's kind of a pain to have to shuttle between the Chapin Pass and Lawn Lake trailheads to do the standard point-to-point route.  Especially when you leave the keys to your truck parked at Lawn Lake TH in Alan's car at Chapin Pass TH.


We both came to the agreement that the best loop would be from Lawn Lake TH, and then up the Ypsilon Lake Trail to a point where you could bushwhack and gain Chiquita's east ridge.  And you might as well just skip Chapin since it would no longer be on the way and you more than make up for it with the 5.5 mile and 4500 feet of climbing to get the Chiquita summit.  I couldn't believe it when I saw on the FKT (Fastest Known Times) website that the legend Bill Briggs held the FKT for the exact route we described.  Bill did the loop in "about 9 hours" on July 31, 1979!  I guess I should have informed Bill that I was going to take a shot at his time since I believe he is still screaming down mountains on his skis and hiking trails at the ripe age of 87.

Well I took my shot today despite dark clouds in about all directions at sunrise.  Luckily, the distant thunder stayed distant and, despite the steady rain and occasional hail, I was able to put together the loop.  I know many others who could easily go faster than my time, but I was very satisfied with my 7 hour and 38 minute effort today.

The GPS track (with georeferenced pictures), 19.8 miles with 7605 feet ascent/descent

And for the Strava folks:

From now on I'm going to call this route "Briggs Loop". 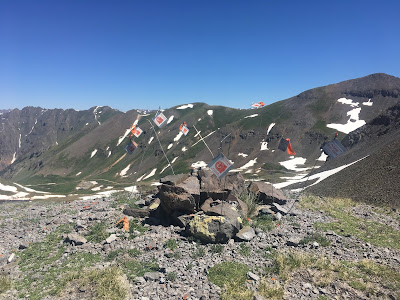 The photo above was taken on top of Green Mountain at about 12 miles into what would have been a 100-mile loop around the San Juan Mountains at Hardrock 2019.  Instead, on this day, we turned around here and headed back to Silverton for a 24-mile "fun" run.  Mother Nature may have cancelled the race this year, but she couldn't put a dent in the Hardrock Spirit we all shared on this beautiful day!

I got to give a talk the other day on this record snow year in Colorado.  People usually don't buy my excuse that I climb all these mountains because it's part of my "job".  I'm not only soaking in the beauty, but also observing the alpine hydrologic cycle at work.  Ok, whether you buy it or not, it was one of the most fun and best received talks I have given in quite some time.  It must have been the Hardrock emphasis and all the "eye candy" of the San Juan Mountains. 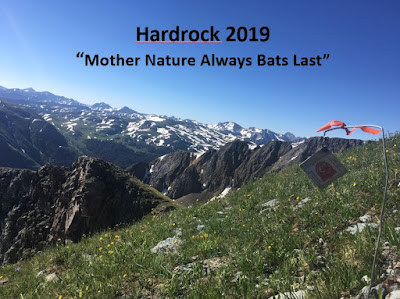 This year, like in 1995 when Hardrock was last cancelled due to snow, Silverton had a big snow year with 269 inches by June 1.  What made these two years particularly a problem for Hardrock though, was the high amount of snow that came after March 1.  This Spring snow is typically wetter, producing a very high snow water equivalent, or what snow hydrologists like to call "SWE". 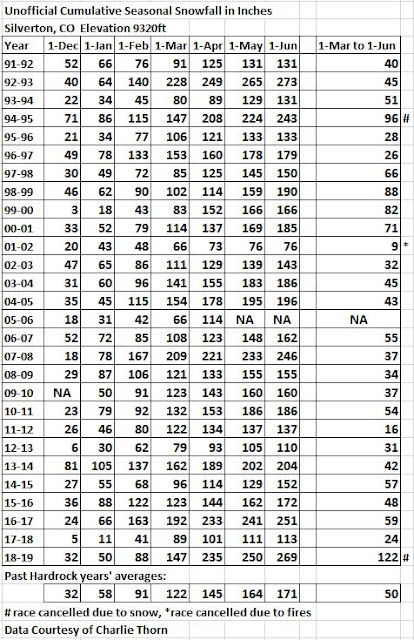 When deciding if conditions will be favorable for the Hardrock event to take place each year, the Hardock committee considers several factors, one being the SWE at the Red Mountain Pass SNOTEL station (USDA-NRCS SNOTEL), which sits at 11,200 feet (approximately the average elevation of the Hardrock course).  If SWE is above 23 inches on June 1, then there is potential for dangerously high runoff and streamflows to occur when Summer comes.  On June 1, 2019, the SWE at Red Mountain Pass was 34 inches. 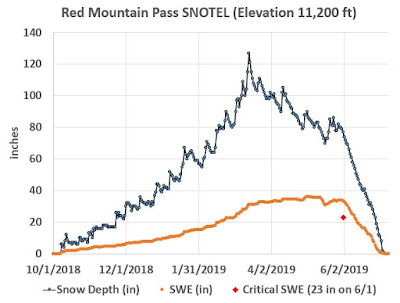 This wasn't the only factor weighing against Hardrock 2019 though.  This snow season saw unprecedented avalanches, leaving avalanche debris across roads and trails still yet to be cleared.  In fact, Grouse Gulch, a critical aid station location on the Hardrock course, was still buried at the time Hardrock was to occur this year. 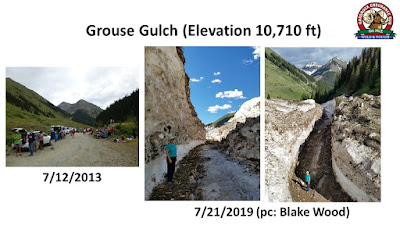 Photos of several other locations taken on or near the Hardrock course this year compared to past years tell quite the story from lingering snow and ice: 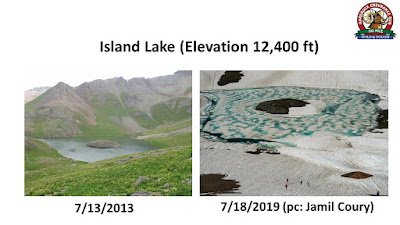 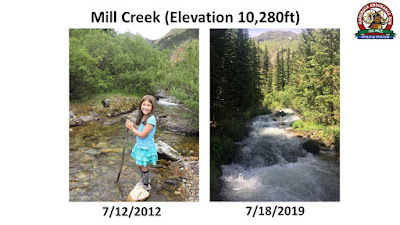 but one thing never changes in the San Juans, and that is the spectacular beauty of this mountain range, regardless of the snow levels. 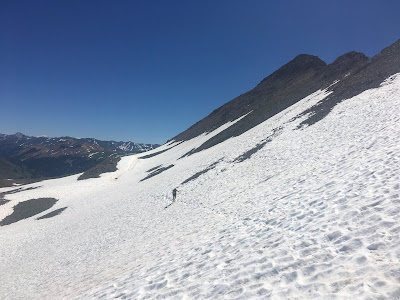 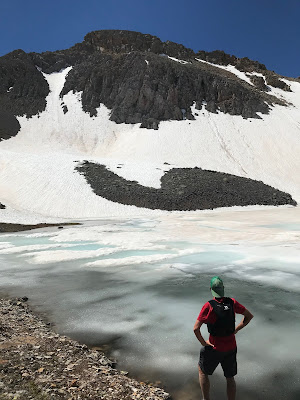 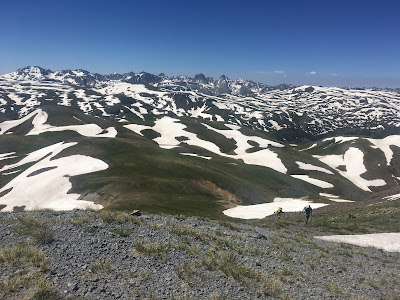 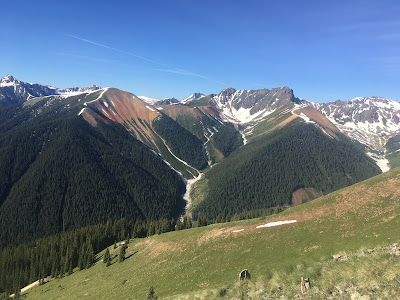 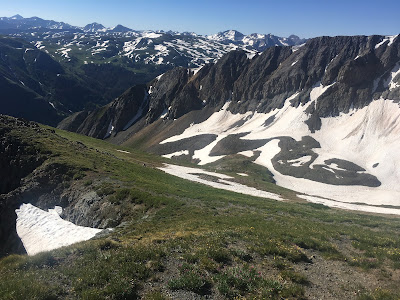 A 360 degree video perspective atop Bridal Peak (because you just don't know which direction to take the best picture):


See you next year Hardrock!  Snow or no snow, the Hardrock Spirit will be alive and well! 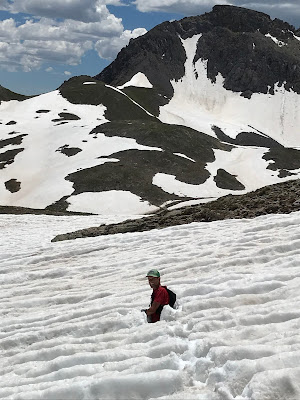 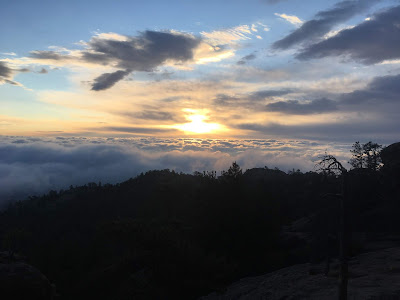 Running trails, climbing mountains, and getting back to nature where life slows down and the mind clears to the beauty filling the senses.  It took a lot of patience and hard work, but it's great to be back!

I thought a long time about sharing this story since we all get injuries along the way, often surgeries, and then we recover, especially in the world of mountain ultrarunning.  But if I can help one person with similar symptoms, then it's worth sharing.

On a typical long run one Sunday morning in March 2016, my right sacroiliac joint seized up and I could barely walk.  It took me 6 hours to get from the top of the Westridge Trail in Lory State Park back to my home about 6 miles away.  After multiple tries of resting (weeks at a time) and comebacks, the SI joint felt better, but now the pain in the groin, butt, and tailbone still made it difficult to impossible to run.

I decided on an MRI in July 2016, which revealed 5 pelvic stress fractures from the sacrum to the pubic bones, so it looked like I just needed more rest.  Living on Horsetooth Reservoir, I decided to pick up stand-up paddleboarding (SUP), which I still enjoy a great deal and continue to do even now that I can run. 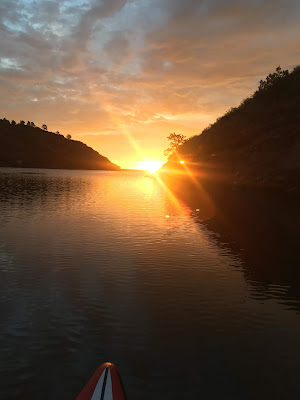 Despite my best efforts to recover while laying off the running, every time I would try again, it was the same story.  Mostly groin pain, both sides.  Every run felt like I had already been running for 90 miles.  So finally in the Spring of 2017, I got a second opinion on the MRI and this time was told I wasn't going to get any better without surgery (actually two surgeries).  Femeroacetabular impingements (FAI) of both hip joints resulted in torn labrums, with the right side barely having any cartilage left.  With no hesitation, and with the goal of running The Bear 100 in 2018 (so I could get Hardrock qualified again), I wanted the surgeries (both arthroscopic) as soon as possible.  Despite shaking his head in disbelief at times, my surgeon knew it was possible and it wouldn't matter if he recommended it or not.  We did the first surgery on the right hip in July 2017.  Unfortunately, there was not enough labrum left to repair in this surgery, so it was more of a cleanup mission and shaving down the bones, both on the femoral head and acetabular socket, to relieve the impingement.  The prognosis was not great but I would likely see at least some improvement.

Rehab started quickly and I was back on the SUP after about a month, and also very committed to the stair climber at the gym.  I even did about a month of easy trail running, although still painful, leading up to surgery #2 (the left hip) in December 2017.  This time the labrum was reconstructed, along with more bone shaving for the impingement.  This meant a longer recovery, but a better prognosis for improvement.  So again, it was a quick commitment to rehab (mostly glute/core strengthening) and generally trying to stay in shape.  I returned to the SUP by March 2018 and again spent a lot of time on the stair climber.  In April, I got the ok to start running, but only on a treadmill for the first month.  I also discovered the Skillmill, which I still use regularly today.

To summarize a race report for both of these races, they were pretty much the same.  I was not as prepared for either race as I typically would want to be.  I sat on a rock and wanted to quit about half-way through both races (I had a million good excuses to not finish).  I even resorted to trekking poles for the last 50 miles of Bear, which I never use.  However, I did finish both races, which was really my only goal (I knew I would be slow), and last month I got my spot in Hardrock 2019.

So now the plan is to continue to get stronger.  I know I am not fully recovered from the second surgery (up to 18 months for full recovery) and there are still days that hurt more than others, but I am leaps and bounds ahead of where I was before the surgeries.  I've gotten back to doing some speed work and even some short road races, making me actually feel like a runner again.  I now know it's all about the glutes and the goal is to literally be a "strong-ass" runner to keep those hip joints working for as long as possible.

Thanks to everyone who has supported me along the way!  Despite the surgeries and recoveries, I still fit in many great adventures over the last couple of years, just at a slower pace. 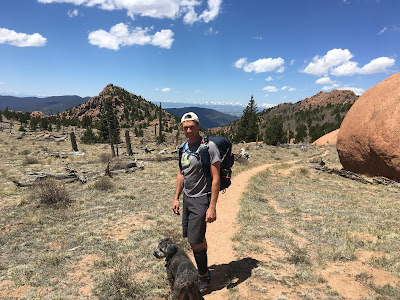 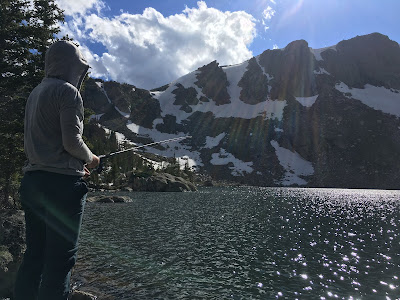 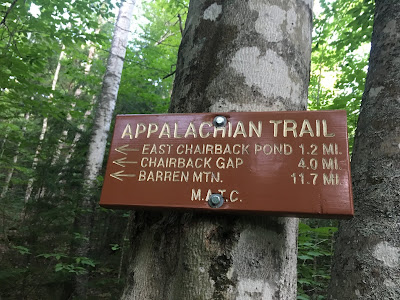 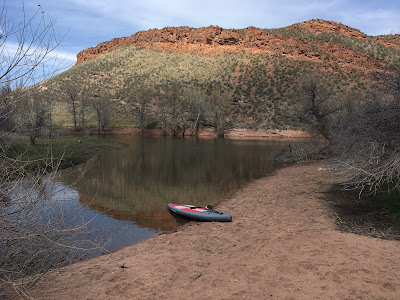 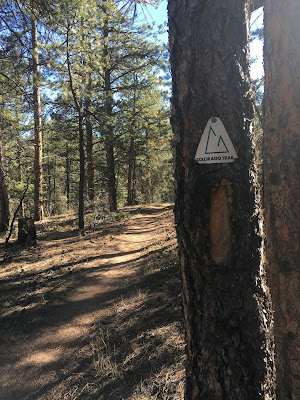 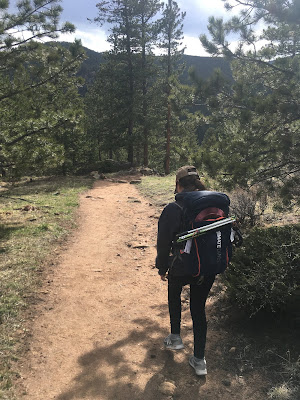 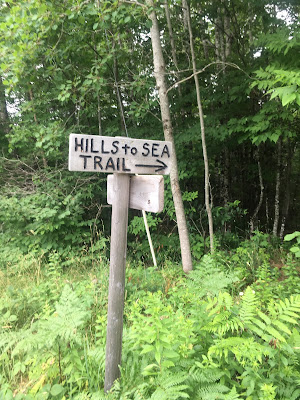 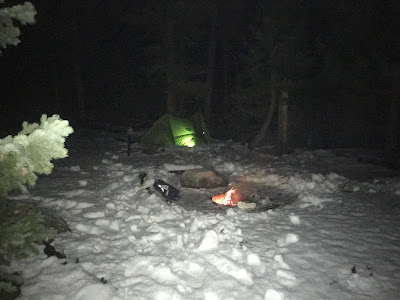