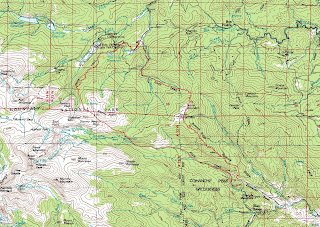 The loop in red.

I have been wanting to do this loop for some time going from the Dunraven trailhead. Finally got it done today. Forgot the GPS but I estimate the distance at around 30 miles and the total climbing around 7500 feet. Really just two big climbs. The first over Stormy Peaks Pass (11,600 ft elev) and the second over Signal Mountain (11,200 ft elev). I took the loop in the clockwise direction since the North Fork trail offers some nice gradual uphill running to warm up on (even a little downhill to the river at the start).

I got up to Stormy Peaks Pass well before sunrise and experienced a nice little snow flurry. I think the days of snow-free trails up high are numbered. Soon after, I was able to turn off the headlamp and enjoy some nice trail and spectacular views as I descended about 5 miles down to Pingree Park. My first time on this part of the trail. 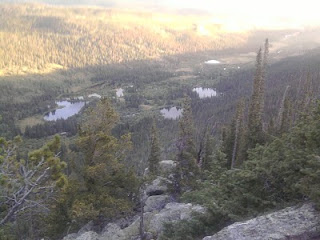 This loop requires a few miles of road running (it is dirt) from Pingree Park over to the Signal Mountain trailhead. Instead of running all the way to the trailhead at Pingree Park, I turned onto the trail for Twin Lake, cutting out a good chunk of the run on the main Pingree Park road. 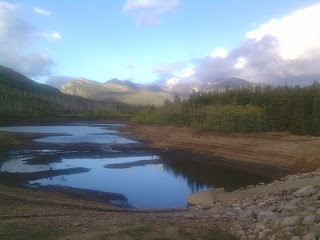 The run up Signal Mountain from the North side is quite mellow the first few miles, but gets very steep on the last couple of miles to the top. Also, my first time on this trail as I have only come up the mountain from the South. It wasn't snowing on Signal, but the wind was nearly blowing me off the mountain. I met my first hiker on my descent from Signal. There were lots of cars at the trailheads, but I don't know where everyone was hiding.

I plan to explore a shorter loop option some other time. There is an unmarked trail that goes directly between Signal Mountain and Stormy Peaks. This trail is shown on old topo maps, but there are no signs for it.