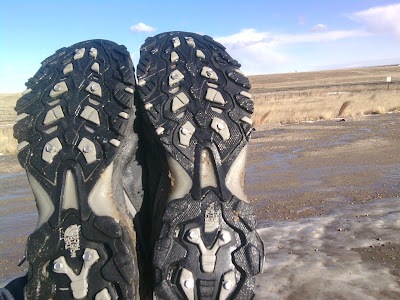 Expecting plenty of slippery slop this morning back on the Fort Collins trails, I made the call to throw on some screws.  It was definitely the right call.  With all of the persistent deep snow last winter, I never bothered with extra traction.  I almost forgot how well the screws work.  I wish I had them in when I was skating down the Barr Trail ice rink on Saturday.  I ended up doing the same run I did 8 days ago from Coyote Ridge (just reversed directions on the loops) and I ran it 28 minutes faster today even with all of the ice.  I was trudging through a fair amount of snow last weekend.  Trail conditions today ranged from perfect along the high ridges to either ice, slush, or mud everywhere else.

I've added Pikes Peak Marathon to the projected schedule for 2011.  I'll probably just focus on the Marathon instead of "doubling" (Ascent and Marathon), hopefully posting a respectable time.  I was already thinking I should do it this year to keep my qualification current.  If I don't run it this year, then that will be 3 years in a row and I would probably have to run a road marathon to qualify again (no thanks).  I guess running down the Barr Trail on Saturday sealed the deal for me.

Huge congrats to Nick for coming in 4th in the voting for UltraRunning Magazine's Male Ultra Runner of the Year for 2010.  It was nice to see that his huge year did not go unnoticed.