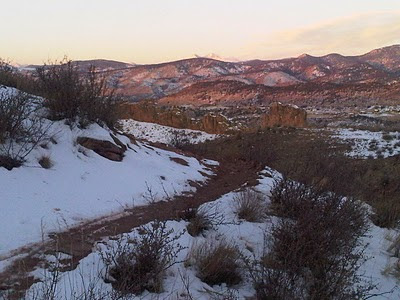 I had done 50K's in December and January, so I thought I should try to knock out a 50K today to get one in for February.  Not real challenging with the climbing today along the Blue Sky trails.  I find it a nice test of the fitness, however, to do some big miles without any major climbs so I have no excuses for not running every step.  I was pretty happy with the result.  Most of the snow from Friday was already gone and I was surprised at how much of the trail along Blue Sky had already dried out.  The worst mud came late morning back toward Coyote Ridge.

So it turns out that heading out from a trailhead at 4:30 in the morning in the middle of the Winter seems abnormal to some, like with the local law enforcement.  After being temporarily detained by the sheriff, I got headed out from the Coyote Ridge Trailhead a little later than planned.  I just had to make up the lost time by running a little harder on what I will call the "Outlaw 50K".