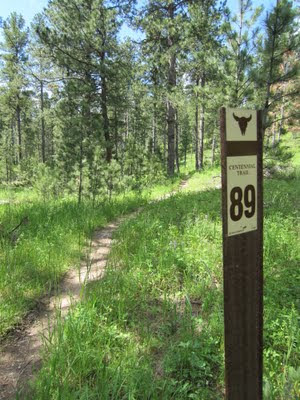 The inaugural Black Hills 100 was the site for my 2nd 100-miler this past weekend.  "Cruisin' the 89" was the motto as we took an out and back course from Sturgis along the Centennial Trail.  I came in to this race vey excited to explore these beautiful mountains.  I also came into this one with a plan that would hopefully put me to the finish in under 24 hours and maybe in the mix near the front in a race that, as far as I could tell, was lacking any really elite runners.  It is kind of funny how quickly a "racing" plan can turn into a "survival" plan and the only thing that matters anymore is making it to the finish line (under the cutoff time).

After some nasty thunderstoms the night before the race, which were sure to add a little more mud to the course, we took off from the track in Sturgis at 6am on what was looking to be a very nice (but warm) day. Around 150 starters for the 3 races (100-mile, 100K, and 50-mile) all taking off together, with about 100 of us going for 100 miles.

So my "plan" consisted of goal times for reaching each aid station, an efficient means for getting through the aid stations quickly, a pre-determined regimen of fueling and hydration, and carrying only what I needed.  The course provided excellent crew access and I had an excellent crew.  For the first time my wife Deanne got to experience one of these events first-hand and she, along with my good friend Kevin (who might as well rent out his crewing talents), had me in and out of the aid stations faster than a NASCAR pit stop.  For about 40 miles, everything was going as planned.  I was holding a steady 15 to 30 minutes under my goal times, hovering somewhere in the top 10 for the 100, and I was absolutely loving the course. It is the pleasure of getting out into places and trails like these that makes me a trail runner.  So I knew from my long history of 100-mile experience (1 previous finish) that the first rule is to expect the unexpected.  So what would it be?

At some point between the Boxelder (Mile 37) and Pilots Knob (Mile 43.5) aid stations my stomach started to cramp.  So far I had either been drinking HEED from the manned aid stations or water with my own Nuun tablets at the unmanned (water only) stations.  One 20 ounce handheld bottle between refills every 1 to 1.5 hours.  I was also eating half a pack (5 chews) of Honey Stingers every half-hour, a Powerbar every 3 hours (2 so far), and had some chips and Coke at Dalton Lake (Mile 29.5).  So I didn't panic and just figured this was going to be might first "low" during the race.  I decided to just slow down for a while until things turned around.  I came in slowly to Pilots Knob, still just 7 minutes over my goal time, and was hoping for some "stomach-happying" food.  Nothing was doing the trick.  Not watermelon, chips, or Coke.  I decided not to kill anymore time there and proceeded on for what I thought would be just 6.5 miles to the Rapid Creek 50-mile turnaround.

I knew my pace was really slowing through this last section to the turnaround and I kept expecting to meet up with the race leader on his way back.  Much to my surprise, I didn't meet the leader until my Garmin watch said 49.4 miles.  I knew there was no way that I was still only 1 mile back of the leader so we had to be in for some bonus miles.  I pushed on past the 50-mile mark at 11:07 (my fastest 50 miles ever) and with no hint of the Rapid Creek aid station in site.  When I met up with the 4th place runner Alistair Munro, who I ran along with earlier in the race, he gave me the bad news, "3.5 kilometers to the turnaround".  Doesn't he know my brain can't do metric conversions right now!  So I hit the Rapid Creek turnaround (Mile 52.3) at 11:45 pretty depleted physically and mentally.  No sub 24 hours gonna happen for me this time.  And I didn't eat or drink a thing over those last 9 miles.

Lying there at Rapid Creek my mind went back to Bighorn where I came into the turnaround feeling like I was done, but left almost 2 hours later feeling like a new man.  My crew had everything for me (shade, icy-cold wet towels, food, drink, you name it).  This was also the first point that I got to see my daughters Madison and Megan, and Kevin's wife Jen who was so great to watch them during the race.  I told them that I was staying for 1 hour and then I would be good to go.  I could surely get my stomach to turn around in an hour and I had every kind of food there to try.  Well I stayed 55 minutes and probably consumed only a couple hundred calories between chicken noodle soup, popsicles, soda, and gatorade.  Before leaving I asked my daughter Madison to run the loop around the track to the finish with me tomorrow.  So it is at this point where the plan to "race" goes out the door and the plan to "finish" becomes the only priority.  Unfortunately, I left Rapid Creek feeling no better than when I got there.

So bad stomach, long course, what's next?  Well on the long 9-mile section back to Pilots Knob and the skies getting dark, just like the night before, it was time for some major thunderstorm action.  Not only was there "drench to the bone" rain, but then came the hail stones that had me eventually ducking for any cover I could find.  Soaked, cold, and still not eating or drinking (dry-heaving anytime I tried), I knew I had to get to Pilots Knob as quickly as possible.  Luckily, I got there in time, stripped off my clothes and jumped in a heated car for 2 hours (best crew ever).

Some sights and sounds from Pilots Knob Aid Station:
This "sport" of ultrarunning paints a fine line between courage and stupidity.  I knew that it wasn't right to keep going on for hours without eating or drinking, but I've never quit a race so maybe I just don't know when to stop.  I'm sure if they had mandatory medical checks, I would have been held back and probably not finished.  So why do we do it?  Even though it was a death march through the night and I was doing all I could do to stay upright through the seemingly endless mud along the double-track sections from Pilots Knob to Dalton, I was amazed by the views of the night sky.  The surrounding storms were some of the coolest sights I have ever seen.  And I welcomed the challenge of getting through the next aid station before the now increasingly challenging cutoff times.

I watched the sun rise on a new day climbing out of Dalton Lake with about 29 miles to go and fueling on sips of water.  Now there was no way I was not finishing this thing.  As long as I didn't get swept away in one of the Elk Creek stream crossings (5 major ones that required ropes), I was pretty sure I could make it.  The sense of urgency felt from the cutoff times now had me running for as long as my stomach could handle it.  The legs and feet were still there (happy with the Hokas) but it was soon back to doing my best dying Elk call when the stomach starting rejecting the running idea.

After the last aid station at Alkali Creek, where Kevin graciously provided a popsicle for me that I actually felt like eating, I hit 100 miles in just under 30 hours (still 5 miles to go).  Getting up over some of the last remaining steep climbs and with Sturgis coming into view, the sense of accomplishment started to set in.  No not a sub 24, or a top 10, but a finish!  I didn't care if I was the last finisher (that might have been kind of cool).  It turned out that 7 finished after me.  Congrats to the winners Adam Schwartz-Lowe (23:01) and Lisa Deyoung (30:17), and the other 29 finishers (full results here).

I obviously still have a lot to learn on these 100-milers.  Most importantly, how to hydrate and fuel beyond the 7 or 8 hours that are typically as long as I will ever go in training.  I wonder if I didn't have any stomach issues how well I would have done.  Well that answer will have to wait for another day and another 100-miles.

For a first year race, some glitches were expected.  The course is first-rate.  Some of the most beautiful single-track trails I have ever run.  Very challenging terrain, but not to the point that the course can't be predominantly "run".  I enjoy the added aspect of some major stream crossings (adds some adventure).  I never got off-course, although I know some did.  Just stay on the "89".  The 13 or so miles (each way) of double-track ATV trails would have been better if not for all the recent rain and resulting mud.  Having underestimated the distances was only a bummer because it wasn't expected.  I had the 50-mile turnaround at 25.4 miles and the 100K turnaround at 32 miles (also both a bit long).  With the extra distance, I feel the cutoff times need to be extended a little.  There also really needs to be a more organized check-in and check-out process at the aid stations with more medical attention provided.  I say this knowing full well that I probably would have DNF'ed if they had this in place.  I did end up in the Sturgis hospital after the race needing a couple bags of IV fluids.  Unfortunately, the post-race was a bit anti-climatic (got handed my buckle at the finish line), but with 70% not finishing no one really wanted to hang around for an awards ceremony.  Again, the crew access was very convenient for this course, which is a big plus.  The host hotel (Holiday Inn Express in Sturgis) was great and even offered a 4am breakfast the morning of the race.  Finally, the Black Hills region provides a great family destination with so much to see and do.  I hope you guys (Chris, Ryan, and Jerry) can keep this thing going for years to come and I will see if we can get Fort Collins more represented up there in the future.  Thanks guys and thanks to all the volunteers!

So back to the question, "Why do this?"


I got quite a bit of variability on the total elevation gain.  According to Sporttracks (with elevaton corrections) it is 20,995 feet round-trip, and according to Garmin Connect (with elevation corrections) it is only 15,256 feet.  The course was advertised as 16,231 feet of climbing.  Anyway, there was plenty of climbing.
Posted by Rob at 6:16 PM