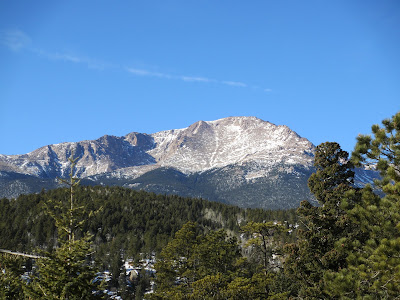 Believe me, there are many days that I realize how lucky I am to live where I do, and this was certainly one of those days.  I completed the Fat Ass Double for the second straight year on Saturday.  After slogging through my hometown Chubby Cheeks 50K in December, I again made the trip south to the Pikes Peak area for the 2nd annual Ponderous Posterior 50K.  At least this time I wasn't the lone Fort Collins rep as Mike made the trip down with me.  We soon discovered our two local movie stars also awaiting the 8am start wave from JT's house, making us 4 strong this year.

In Hardrock fashion, we ran a clockwise loop this year (counterclockwise last year), and the course took on the nice additions of a Red Mountain summit and a trip up the famous Incline (my first time).  Speaking of Hardrock, and running with so many already in the 2012 race, it was suggested to me that I only needed to break four legs to secure my spot.  Well I felt that wouldn't really be in the spirit of a jovial Fat Ass event, so I am still #4 on the wait list.  Although, I do think Pedatella broke his hand.

We took off at 8am sharp and I was quickly down to my t-shirt on this gorgeous day.  This year we started with a run through Red Rock Canyon before hooking up with the Intemann Trail (where I ran some bonus miles last year).  The rolling singletrack through here made for a nice conversational pace running along with Mike, Eric, and catching up with Bremner and his dog (until the dog took off after a deer).  Ryan and I reminisced the Black Hills 100.  I also recognized several other folks who made it up to Chubby Cheeks.  They were all commenting how our Fort Collins course was much tougher.  Yeah, we had a lot of snow and these conversations took place before the Incline.  Soon (9 miles in) we were making a left turn for our first big climb of the day up Red Mountain.

Seeing the lead pack still on Red Mountain when I got there made it obvious that no one was in a hurry on this day.  And why would they be?  It was hard to leave the summit, but the Incline was calling us.

The Incline, at over 2000 feet of climbing in just about 1 mile, was hopping with activity on this summer-like day.  No doubt, this fun run was now turning into a bit of work.  I certainly didn't blaze up it (I think it took me about 35 minutes).  I was able to carry on some Jemez conversation with Steve on the way up, but the legs were burning and felt like jello when I tried to run after reaching the top.

No longer an Incline virgin, I slowly got my legs to run again and, after a short section of the familiar Barr Trail, I was looking forward to the well-earned descent of the snowy Longs Ranch Road.  The temperatures were still very comfortable above 9000 feet and I was guessing it would have been a great day to summit Pikes Peak, but I wasn't about to do those bonus miles.

After having a blast coming down through the snow of Longs Ranch Road, I fully expected a large gathering at the Waldo Canyon Trailhead.  I was right.  This was our one aid station which was fully stocked.  Water, PBR, and donuts!  What else do you need!  I figured that I would catch up with Brownie, our gracious host, here.  Again, nobody was in any real hurry to leave.  It was just too nice a day!

I did eventually leave the trailhead, as I knew there were 13 miles to go and the next section of trail was actually my favorite.  The Waldo and Williams Canyon trails were the pleasant surprises of last year's run and I was looking forward to running through them again.  I was mostly running on my own through here and just enjoying the solitude for a while.  There were some pretty nasty icy patches, but I managed to stay upright without ever opting to put on my spikes.


After climbing up out of Williams Canyon, the end was now in sight.  It was on the long, dusty run down Rampart Range Road that the legs started telling me it was almost quitting time and, for the first time all day, I was looking forward to the run being over.  Ryan, Jeremiah, and Chris ran me down by the bottom, and along with Leila we ran over to the Garden of the Gods.  Once hitting the singletrack in the Garden, I was reinvigorated and we pushed along a strong pace.


Ryan and Jeremiah dropped off for a final "yellow" drink but I decided to chase Leila to the finish back at JT's house, where I knew there was better beer.  Official time: 6 hours and 27 minutes.  Probably could have broke 6 hours if I had cut down on all that "aid station" time, but the day went by too fast as it was.  My Garmin watch put the course at 30.3 miles with 7568 feet of climbing.

So yes, I am very lucky to live here in the Front Range of Colorado amongst some of the best trails and some pretty good folks to share them with.  Thanks to JT and all the CRUD for putting this together again.  Now with Brendan planning a Durango Fat Ass for February 4th, we truly have the Colorado Fat Ass Slam (Boulder Basic, Chubby Cheeks, Ponderous Posterior, and Phil's Fatass Run).  I might have to think about completing that Slam in 2012-2013.

All photos can be seen here.