In Search of Clark's Arrow 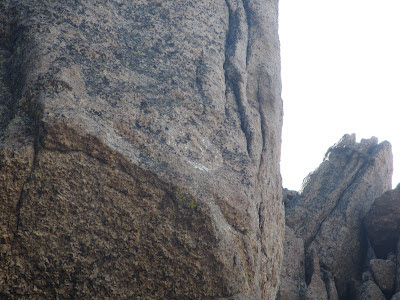 Legend has it that sometime in the early years of Rocky Mountain National Park (park opened in 1915) a park ranger by the name of John Clark painted a white arrow enclosed in a circle high on a west-facing rock.  This arrow was to guide climbers to a passageway from the Keplinger Couloir over to the Loft, the expansive saddle between Longs Peak and Mount Meeker.  My task on Saturday morning was to find the historical graffiti.  From the center of the above photo, you can see Clark's Arrow still remains.

I actually came to the arrow from the reverse direction, having already climbed up to the Loft from Chasm Lake and visiting the Meeker summit.  Upon reaching the seldom-used Keplinger route it was a matter of looking back over my shoulder to find the famed rock marking.  Continuing with the history lesson, the Keplinger route was navigated by John Wesley Powell on the first recorded summit of Longs Peak in the 1860s.

Another perfect morning in the high mountains.  I joined the masses after summitting Longs and made a personal descent record for the Keyhole route (now completely free of snow and ice).  I caught up with another runner about 2 miles from the trailhead (don't see too many people running up here).  It turns out I will be running with Eric again in 2 weeks as he will be one of the "lucky" ones toeing the starting line with me at Hardrock.

Photos from the day: