Summer in the Never Summers 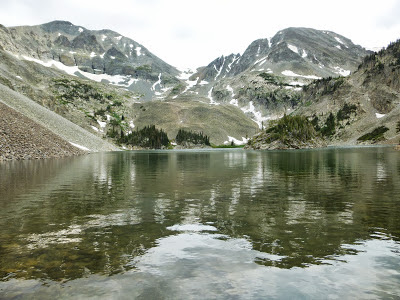 It is clearly obvious now that I have spent WAY too little time in the Never Summer Range which runs from Cameron Pass down through the northwest corner of RMNP.  Starting at Lake Agnes (actually the Lake Agnes trailhead a mile below) with Nick and Mike, we had no clear objective for the day.  Just an "easy" day in the mountains for 2 guys "recovering" from some big mountain races less than a week ago, and one "tapering" for quite the mountain adventure in less than a week.  It turned out that Mahler and Richthofen (shown above, Mahler on the right) would call us out.

﻿
A trail shown on the map indicated a possible route out of Agnes gaining the ridgeline northwest of Mahler.  That trail never really showed up until we reached the ridgeline and a climb up the Agnes inlet drainage worked the best.  This route led us by two picturesque high mountain lakes, waterfalls, and enough wildflowers to induce multiple spontaneous outbursts of "Sound of Music" tunes.  The summit of Mahler came quickly from there.


The line to Richthofen from the 12,493 foot summit of Mahler consisted of a narrow crumbly ridge and did not look too inviting.  We took it as far as we were all comfortable, but then decided to bail and opted for a long scree ski down into the magnificent basin to the south.  From there it would be a longer, but more solid climb up to the 12,951 foot summit of Mount Richthofen, the highest point in the Never Summers.

Static Peak would be next in line as we would circle the Lake Agnes basin, but the consensus was that we had enough for the day and, according to the topo map, a descent back to Agnes from the Richthofen/Static saddle should be doable.  So we pushed forward.  Little did we know that we were not done with Richthofen.

We resisted the urge to tack on Static and started the nasty, crumbly descent back down to Agnes from the saddle.  Unfortunately, a significant cliff band would block any and all paths we tried to get down.  Seems as though we are a lot better at climbing mountains than getting off them.  So a "Double Richthofen" it was, since we were quite sure of a route back to Agnes from the Richthofen/Mahler saddle.  Back over the summit of the "Baron" (Baron Ferdinand von Richthofen) and finally we did make our way back to Lake Agnes, or as Mike was now calling "Leg Acheness".


Much, much more to be climbed and seen in the Never Summers.  A full traverse from Baker to the Nokhu Crags?  Good luck. 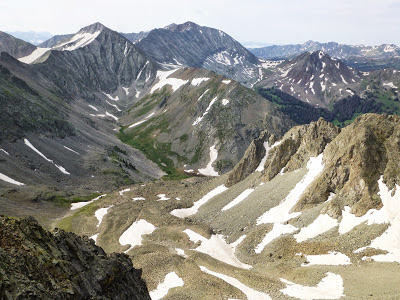