NOBO on the HMW 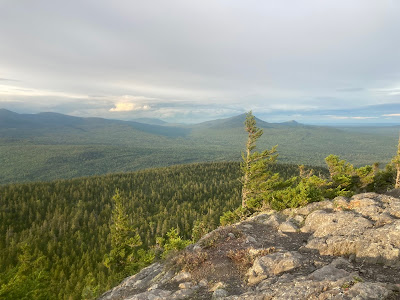 Last November I sat at Nahmakanta Lake, 74 miles into my first northbound (NOBO) attempt at the Hundred Mile Wilderness (HMW), and decided I had enough.  My pace was slow and no speed records were going to be set but I still had a bit of regret for not finishing the trek to Abol Bridge.  This past Labor Day weekend, I took care of some unfinished business.

Unlike last November when I was the only one in the Wilderness, this time I would be joining many NOBO thru-hikers nearing the end of their long journeys which is very inspiring.  I loaded my pack with little candy bars and was happy to spread some "trail magic" at every chance.  While wanting to finish in a respectable time, the most important thing to me was to make it to Abol Bridge (the northern terminus of the HMW).  A setback from a knee injury this spring made any expectations for the Fastest Known Time (FKT) very low.

My sister Regina (trail name "Whispering Pine"), with a little help from "Pa Pine", would crew me from all the typical access points.  After now doing this nearly 3 times, they have the crewing plan down to a science.  An AT thru-hiker herself, Regina was also glad to meet many of this year's NOBO class and made sure they were well fed.  I felt a bit like a celebrity at times as many of the hikers I came upon already knew me after meeting my crew earlier.  I could only shrug my shoulders and try to convince them that they were the ones doing something remarkable.

So how did the run go this time?  I paid little attention to the time during my run but did some analyses after.  I ended up hitting all of my splits to Jo-Mary Road (Mile 58.5) very close to my split times last November.  In fact, my elapsed time leaving Jo-Mary Road was identical to the minute.  This was a bit disheartening because I felt much stronger this time, however my pace stayed the same.  I also experienced a lot of rain during the afternoon and evening of Day 1, making the already difficult footing downright treacherous at times.

I feel like the 15 miles from Jo-Mary Road to Nahmakanta Lake is sort of the crux of the route going NOBO.  This section is where the wheels fell off for me last year.  Although not a difficult section in terms of climbing or descending, it just seems to come at a difficult point where the fatigue can really set in and you're too far from smelling the finish.  Despite not feeling all that great, I ended up doing this section nearly 2 hours faster than I did last year.  This wasn't too surprising since I was moving VERY slow last time before calling it quits.

I made a very quick stop for resupply at the beautiful Nahmakanta Lake and was very excited and reinvigorated to now be moving onto some trail that I had only previously done SOBO back in 2013.  It was also nice to take off from the lake with many thru-hikers getting a late morning start for their day.  They were already well aware of what I was up to after hanging out with Whispering Pine for most of the morning.  A couple of hikers even set the pace for me on the steep climb up Nesuntabunt Mountain.  I couldn't believe how fast they were moving with their heavy packs and over 2000 miles already on their legs!

I came into Pollywog Stream in the hot afternoon sun after running very well through the 8 mile section from Nahmakanta.  Maybe I pushed that section a little too hard because as soon as I sat down for a brief break in the shade I wasn't sure if I could stand back up.  Regina fed me a plate of watermelon, refilled my water bottles, and after about a half hour break (by far my longest pit stop) sent me on my way for the long final 17-mile stretch to Abol Bridge.  Unfortunately, I now knew I would be going into a second night and would not be greeted by the view of Katahdin at the finish, but I was going to finish.  Thirteen minutes before midnight, after a very long 17 miles, I was hugging the guard rail of the bridge and my NOBO adventure was complete!

My 37 hours and 45 minutes were even slower than the slow time I expected, but really just a confirmation of how difficult this route is.  Given a smooth gravel surface over the last 17 miles of terrain, I think I could have jogged it in, but instead it took me 8 hours!  I just wasn't capable of moving very fast through the non-stop rock and roots anymore.  All I could think was "how did I run through this section in 3.5 hours going SOBO 8 years ago?".  Now that I have finished both directions, I really think SOBO is the way for me if I want to go for a fast time on the HMW.  Of course, I also look forward to another NOBO passing of the HMW at a much slower pace starting from Georgia in the not too distant future.

My hats off to Barry Howe for lowering the overall FKT to 29 hours and 6 minutes last week on a supported NOBO effort!  Read his report here.

So I leave this trip to Maine with my heart and soul filled again by the HMW.  It was really a perfect long weekend combining this adventure with some well-deserved relaxation at Camp Pine with friends and family.  In a few days I'll see if I left enough in the tank to complete my 3rd Bear 100.  Honestly, after laboring for over 37 hours on the HMW, these Rocky Mountain trails feel smooth as butter. 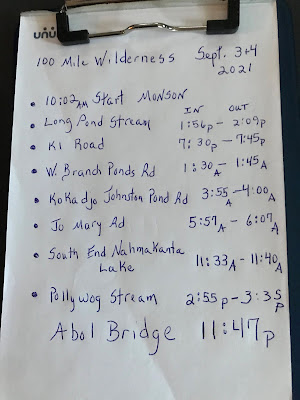