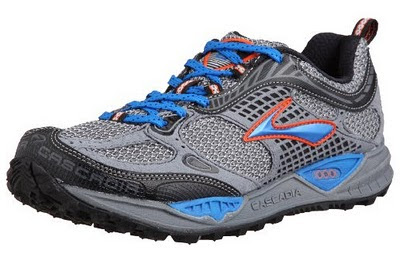 First run in these new shoes today along my regular Foothills Trail and Reservoir Ridge Loop.  I won't go into a full shoe review, but I'll just say this was the best run I have had in months.  A new PR on this training run and over 11 minutes faster than I ran it two weeks ago.  I've been battling a nagging PF the last couple of months and forgot that I can actually run fast downhill.  Just some very dull heel pain near the end that didn't slow me a bit.  It was definitely time for new shoes as my gore-tex North Face winter shoes (overkill for this "winter") were pretty well worn out at over 500 trail miles.  I've been running in Cascadias since version 2 and I would have to say that Jurek made some nice adjustments to this version, most notably a cool lacing pattern and gusseted tongue making for very nice fitting upper.  They also lightened this shoe by an ounce from the last version putting it right there with the lighter (non-minimalist) trail shoes on the market.  I'm going to try running with my orthotics in these Cascadias to relieve some pressure on the PF and see how it goes.  Seemed to work very well today.

Shoe Review Update (12/23/2011):
Kind of late with this update, especially since the Cascadia 7 release is just over a month away, but I've done a lot of running in the Cascadia 6 and have more to say about the shoe.  I have loved the fit and feel of this shoe and its slightly lighter weight over previous versions.  I have never had the upper hold up before without wearing a hole in it somewhere over the runnable life (500-600 miles) of the shoe, but the Cascadia 6's have held up.  My only complaint with this shoe is the tread.  The new circular lug design works great when new, but wears out fast (200-300 miles).  I've run the shoe tread just about bald.  I'm glad to hear the 7's are switching back to a tread similar to earlier versions.  I'm looking forward to the Cascadia 7 in February.
Today's run
Out and back from Maxwell TH to Michuad Lane TH on Foothills Trail with a loop around Reservoir Ridge.