Nightfall on the Wild Basin 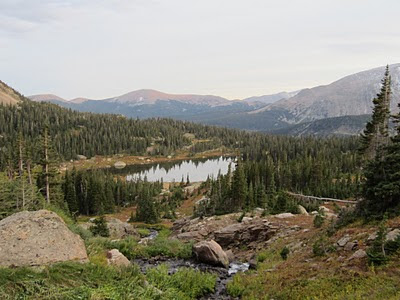 I had the rare opportunity for a late afternoon/evening adventure in the beautiful Wild Basin of Rocky Mountain National Park.  I took off from the Wild Basin trailhead at 5pm Saturday with the goal up getting up high enough to take in some sights and scout some future peak routes before dark.

I was not accustomed to the crowded trailhead and steady stream of hikers, mostly families heading up to (or back from) the Calypso Cascades and Ouzel Falls.  I normally tend to be the first one to a trailhead in the morning.  However, the crowds thinned quickly as I opted to head up toward the Lion Lakes.  The last person I saw was at the trail split for Lion or Thunder Lakes at 4 miles from the trailhead.  It was then just me, the beautiful mountains, and the dwindling daylight.

After passing by Lion Lake #1, the largest of the Lion Lakes right at timberline and 6 miles from the trailhead, there was no more real trail to follow.  I had some thoughts of trying to obtain the North Ridge and loop around the summit of Chiefs Head, but I think that route would be better approached from Sandbeach Lake and Mount Orton.  There is also a very nice trail up to Sandbeach Lake that I hiked several years ago and would love to get back to.  What was really gaining most of my attention, though, was the awesome looking peak of Mount Alice.

I meandered a bit, taking in all of the scenery and slowly gaining some altitude up toward Lion Lake #2 while passing by some really cool waterfalls.  I then thought it would be nice to hit the pass between Alice and Chiefs Head in time to catch the sunset.


As I continued to climb and the sun continued to set, I admired the late evening hues reflecting off Chiefs Head and was even more captivated by the spectacular face of Mount Alice.  I had made my way onto a ridge to the west of the lakes that allowed for a nice route to the pass with a mix of stable boulder fields and soft tundra.

I reached the pass (8 miles from the trailhead) shortly after sunset, but still had a pretty sweet view of the red sky to the West.  There were also nice views of McHenry's Peak and I could make out the Spearhead poking up over the horizon to the East.  Chiefs Head was still obstructing any views of Pagoda or Longs.

The conditions on the pass were perfect and pretty amazing for late September.  No wind and I had yet to put anything on over my t-shirt.  Just a week ago there were winter conditions up here and several inches of snow.  I broke out my headlamp and a long sleeve shirt and toyed with the idea of still summiting Alice.  It turns out to be a fairly technical route getting Alice from this side, at least as far as I could tell from my headlamp.  I scurried up a little ways in the dark, but thought better to come back another time.  I played it safe and returned my same route and was back at the trailhead at 10pm.

I didn't even mention the nice colors from the aspens down nearer the trailhead as Fall is in full swing.  Without a doubt, there are lots of great adventures to be had in the Wild Basin.  I think a traverse of all the peaks surrounding this basin would be pretty epic, but of course there are also many great options for breaking it into a few smaller loops/traverses as well.