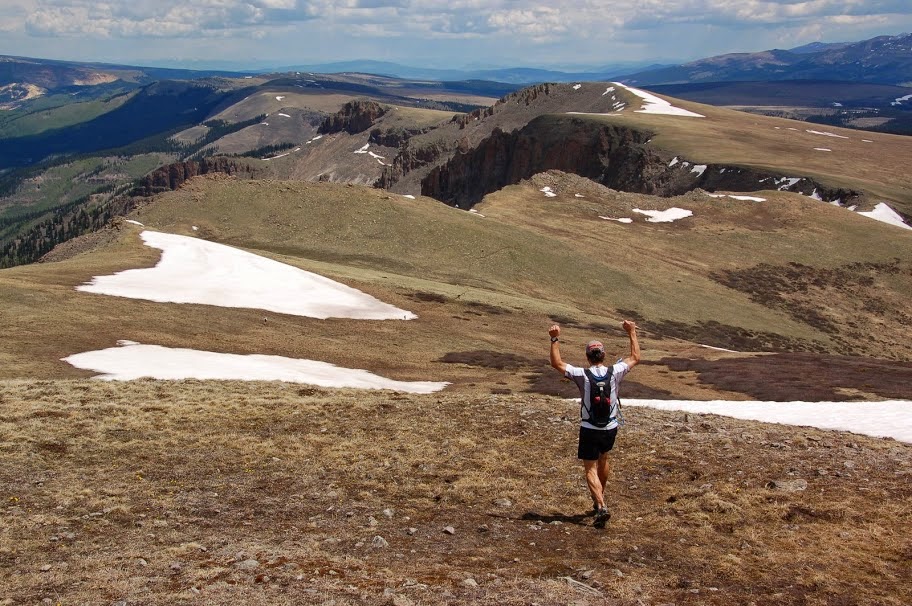 Five years was much too long of a wait to return to this race (my first 50-miler in 2009).  Lake City is great!  The San Juan mountains are great!  This race is great!  Although I wasn't as fast as I would have liked (did someone say "training race"?), you can't complain when you get to soak in the beauty of the San Juans.

When my sister Regina asked which 50-miler she should do in honor of her 50th birthday, I immediately responded San Juan Solstice 50.  Besides, I wanted to run it again too.  Unfortunately, Regina's race ended at the Carson Aid Station about halfway into the race due to the time cut-off.  The experience of just half of this course, however, beats what most other courses can offer in a full 50 miles.  She seemed to agree and was not too disappointed by her abbreviated race.  I know she will knock off an easier 50 miler soon and it wouldn't surprise me to see her back at this race some day.

My race.  Well I hadn't gotten above treeline until race day, and it probably showed.  I didn't feel like eating at any point and I realized you can't just fuel on PBR for 50 miles and get away with it.  I took Jaime's splits from last year as a guide to my A+ goal of sub-11 hours.  I was on track until Carson (mile 22), but slowed significantly from there.


I spent some time with Alabama Rob up on the Continental Divide.  Although he didn't get into Hardrock this year, he still made the trip out to play in the San Juans.  The views were amazing (it was a snowstorm in 2009) and Rob and I were just soaking it in at a leisurely pace.

The Divide Aid Station (mile 31) and the drop back down below the trees seemed to take forever to arrive.  I got passed by Amanda and held on with her to the aid station, but it was clear she had a lot more in the tank than I did.  She kicked my butt, once again.  Great race Amanda!


Some mashed potatoes and watermelon at the aid station gave me just enough energy to slog my way to Slumgullion (mile 40) where I got the news of Regina's shortened race.  Another PBR, some more watermelon, and I was ready to get this race over.  I asked Kristel if she wanted to join me for the last 10 miles (they allow pacers from here) and she was in.  We left to a Tarzan call from my sister Robin, who also made the trip out to support her siblings.


I was just about crawling on the final ("easy") climb to Vickers, but I made it.  I am pretty sure Kristel has never seen me move that slow, even after pacing me at Hardrock.  I then ran, somewhat respectably, the downhill to the end to slip under 13 hours (12:56).


I am so glad we got to run the traditional course, as the high water and deep snow was putting that in doubt until the week before the race.  The stream crossings were raging, but fun.  Postholing up to your waist at times on the Divide was a little less fun, but not much.  It's the stuff like this that makes this race special.

I'm so proud of Regina for coming from sea level to take on one of the toughest 50-milers for her first 50.  If the cutoffs weren't so tight, I'm sure she could have completed the course.  Congrats to so many of my friends who also raced this year, especially to Kristen for getting her first 50-miler and making it look easy.  Also thanks to all my friends out there on the course providing their support and my awesome crew and surprise pacer.  Thanks Robin and Kristel!

So I guess it is taper time for Hardrock.  Too bad, I don't taper.  Bring on summer in the Rockies!