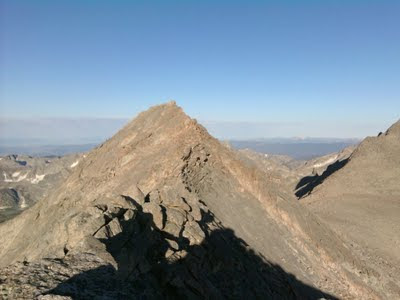 Five hours to cover 10 miles?  Yes, that is the kind of "running" I like to do this time of year!  A summit of the 13,911 foot Mount Meeker in Rocky Mountain National Park and some high alpine exploring from there.

As expected, a full parking lot at 4:30am at the Longs Peak Ranger Station trailhead.  Meeker's sister peak (Longs) gets all the attention because it is above the magic number of 14K feet, but I think the Meeker summit, with some serious exposure, offers even more of a thrill.  I passed a steady stream of hikers as I ran up to the Chasm Lake trail junction.  Then I headed toward Chasm Lake and was alone for the next 4 hours.  I hit the Loft route just at first light.  This route takes you straight up the gut between Longs and Meeker until reaching the saddle (Loft) between the two summits.  I was surprised that none of the Longs Peak seekers were opting for this route this morning.

After reaching the Loft it is a right turn for Longs or a left turn for Meeker for a pretty quick summit either way.  I think I could have set a new Longs climb record for myself if I was heading there today, but that wasn't my destination.


The summit of Meeker is really 2 summits separated by an exhilirating "knife's edge" between the two.  I passed over both summits and decided to try descending via the Northeast ridge, just skirting the 1000 foot dropoff cliffs to my left.

After passing the cliffs, I tried peeling off the north side of the ridge back toward Chasm and was greeted with neverending loose scree all the way down.  I actually think descending down toward Wild Basin and picking up a trail down there would make for a sweet loop (and a lot easier descent of Meeker).  It would just require a few miles of roads to get between trailheads (or a shuttle).


I hit the valley quite a ways below Chasm Lake and just below treeline.  I then bushwhacked my way over another ridge to get back to the Longs Peak trail and was finally running again back to the trailhead.  This kind of stuff is just too fun!